This is a fascinating study of what the title suggests. It is also a remarkable study of a "natural experiment" in the evolution of government. Put a couple of thousand men, not of the nicest kind, into close confinement with limited communication facilities and little government, and see what happens. What happens is government, based largely on ethnic gangs, with hierarchy, rules, and sometimes written constitutions. The basic problem to be solved is the management of the market for drugs, and solving that leads to genuine institutions. A great read.

David Skarbek’s "The Social Order of the Underworld" can be read with great profit on each of three levels: it is an engrossing ethnography of American prison life; it is a penetrating economic analysis of the organization of the drug trade; and it offers an innovative theory of how an effective governing institution can originate in the wild and exert legitimate domination over its subjects. This book is a stunning achievement that makes me proud to be a social scientist.

David Skarbek has written a wonderful book. It is a gripping account of prison gangs, pointing to a wholesale re-thinking of the management of American prisons. But it is far more than this: if you care at all about ethnic politics, violence, and the emergence of social order, organizational theory and the problems of collective action—in short, if you have any interest at all in how societies govern themselves—you have to read this book.

Meticulously researched and convincingly argued...Skarbek’s book is an outstanding addition to our understanding of self-governance, its ubiquity, and effectiveness.

Drawing on economic theory, David Skarbek shows how social order can emerge in the most unlikely circumstances. In the nasty and brutish world of American prisons, gangs have emerged to govern the penal system, settle dispute and regulate the market for drugs. This is a story about the ingenuity of gang members and of institutional failure. The Social Order of the Underworld straddles all the social sciences to give us a masterly account of the human condition in the most harrowing circumstances. Add a vivid narrative style and the total absence of jargon, and you have in your hand a terrific book.

--- Federico Varese, Professor of Criminology, Oxford University, Author of Mafias on the Move

Skarbek...shows how gangs have spread through the prison system in the United States. He argues, convincingly, that gangs offer protection and governance in places where established institutions fail.

A fascinating new book.
--- Matt Ridley, The Times, author of The Rational Optimist
Excellent...A very interesting book, which should be read by anyone with an interest in this topic.
--- Tyler Cowen, George Mason University
The most perceptive book about the US prison regime....Skarbek's The Social Order of the Underworld should serve as a terrible warning of where [the UK] may otherwise be heading.
--- Vicky Pryce, former joint head of the UK Government Economic Service

A fascinating book
--- Mark Kleiman, Professor of Public Policy at the NYU Marron Institute for Urban Management
The Social Order of the Underworld is thought-provoking and challenging...in jurisdictions like England and Wales, where gangs are a significant issue but less firmly entrenched, policy-makers in this field potentially have much to learn from Skarbek’s book.
--- Tim Newburn, London School of Economics
​
Every once in a while a daring book or article comes along that helps us establish new connections between apparently distant analytical and geographic locations…The Social Order of the Underworld, by David Skarbek does just that…it is prime evidence of why rigorous, but methodologically flexible, academic research and heterodox thought is often much more deeply relevant for the real world….Many fields of study need to take notice of what this book provides. It is deeply relevant for anyone interested in prisons anywhere, but also to those working on organized crime and gangs, violence, ethnicity and race, governance, urban sociology and politics, economics and, even, international development and anthropology.
--- Graham Denyer Willis, University of Cambridge
​David Skarbek’s The Social Order of the Underworld: How Prison Gangs Govern the American Penal System is a revelatory account of the etiology, flourishing, and demise of prison gangs. Skarbek works in a rational choice tradition, but also brings to bear a rich tapestry of first-hand accounts. He shows that prison gangs are an inevitable (and, yes, rational, even efficient) response to mass incarceration and the new demographics of prisons. The result is a compelling portrait of the inadvertent consequences of mass incarceration.
--- Aziz Huq, University of Chicago Law School
…meticulously researched, soundly reasoned, well written, and accessible to specialist scholars and casual readers alike. It should be considered required if not immediate reading for anyone with serious research interests in either economics or the applied fields of crime and punishment…a much needed methodological and theoretical update to the currently dominant and arguably incomplete models of crime and punishment.
--- Daniel J. D'Amico, Brown University
A genuinely impressive intellectual achievement.
--- Peng Wang, The University of Hong Kong
Skarbek utilizes a dizzyingly wide range of data sources
​--- Jared Hanneman, Thiel College
David Skarbek aims to show that, more often than not, the violence evinces the rational choice of actors deeply concerned with preserving stability in prisons. The perspective is that of a political economist, but there is in this study a rich portrait that can be understood in normative terms using the lens of legal pluralism.
--- Rene Provost, McGill University
The book is very well written, and it is enjoyable and engaging to read. Highly recommended.
--- ​Maurizio Catino, University of Milan
Brilliant book, meticulously researched, well argued, and clearly written. Order now for you and your students edification and pure pleasure in reading well written and well done social science.
--- Peter Boettke, George Mason University
Perhaps the most complete and compelling account of prison gangs to date... a noteworthy achievement. Social Order is a thoughtful and thought-provoking book that uses the curious case of prison gangs as a conduit to teach an important lesson about how informal rule of law will rise when established social and economic institutions fall. Skarbek has produced a cogently written, multifaceted text, which will attract analytical sociologists, cultural economists, and criminologists alike and hopefully incite further meaningful study of prison life and penology.
--- ​James Densley, Metropolitan State University
[Skarbek] makes his case with compelling logic and evidence… [he] brings a refreshing perspective to prison research… A short review cannot do justice to this valuable work or fully develop the nuances. It is perhaps the best book on prison culture and administration since James Jacobs’ Stateville: The Penitentiary in Mass Society.
​--- Jim Thomas, Northern Illinois University
Skarbek’s book has much to offer—especially as a classroom tool. It is highly readable, well organized, and...provides a concise introduction to basic economic theories of governance and punishment in a field that tends to be more sociologically focused. And it certainly provides a fresh perspective on gangs.
--- Keramet Reiter, UC Irvine
The Social Order of the Underworld is an excellent read with an illuminating analysis. Those unfamiliar with the world of penal gangs and
those looking for a refreshing take on the organization of inmate social systems would do well to start with this book.
--- Michael L. Walker, University of Nebraska
Skarbek has produced a must read piece of research for anyone remotely interested in the American criminal justice system. His well-argued economic analysis makes it difficult to subscribe to any other theory of what we’re seeing in the prison system and why.
--- Adam Bates, Cato Institute
A fascinating account...a model example of how to use economic analysis to highlight the illegal world, without falling into the trap of economic imperialism...a must-read.
--- Diane Coyle, University of Manchester
This work is an intriguing, well-written and insightful contribution to the gang and prison literature...I found the intervention of Skarbek’s work to be thought-provoking and analytically enriching in an area that is extraordinarily bereft of rigorous critical inquiry
--- David C. Brotherton, John Jay College
​
​This is a really incredible book. I was utterly fascinated by it. I learned an immense amount, way too much, actually, about prisons...it's a fabulous application of economics to a wide range of social phenomena. It's really an amazing book.
--- Russell Roberts, Hoover Institution, Stanford University
Undoubtedly the most important work on prison gangs in the last two decades
​--- David Pyrooz, UC Boulder, and Scott Decker, Arizona State

International Association for the Study of Organized Crime​

British Sociological Association and the BBC 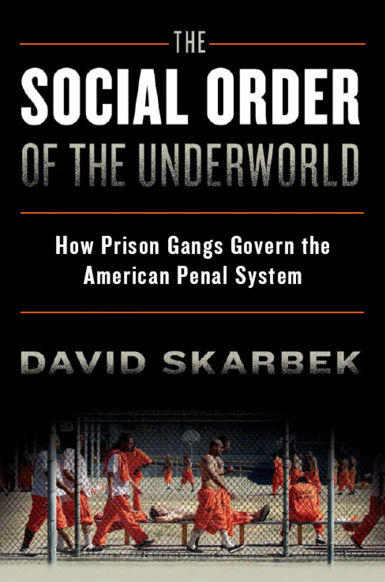 When many people think of prison gangs, they think of chaotic bands of violent, racist thugs. Few people think of gangs as sophisticated organizations (often with elaborate written constitutions) that regulate the social and economic life of the prison. Yet as David Skarbek argues, gangs form to create order among outlaws, producing alternative governance institutions to facilitate illegal activity. This book is a fascinating look into the seemingly irrational, truly astonishing, and often tragic world of life among the society of captives.

​Reviewed in The Economist